The biggest olive oil competition in the world you never heard of. This olive oil competition was created by the development of the NMR method of measuring the phenolic content of olive oil. It was developed at the Univ. of Athens by Dr. Magiatis and Dr Eleni Melliou and their team of researchers. The first results proved the ancient text written by Dioscorides where he stated that “medicinal” quality olive oil could only be made from green unripened olives. After testing all the varieties of olives in Greece and at different maturation cycles they discovered something very interesting. Oleocanthal and oleacein were the two most abundant phenolic compounds in early harvest olive oil but not from late harvest olive oil. Ancient cures using olive oil were mostly to cure inflammation. Oleocanthal is a powerful anti-inflammatory compound and oleacein has strong anti-oxidant properties. World Olive Center was created to fund research and raise awareness to the enhanced health benefits of high phenolic EVOO.

This combination is unique to Greek olive varieties. Over 90% of Greek olive varieties have these characteristics of phenolic content. This is our added value proposition to the olive oil industry. We offer a superior product, transparency, science and a direct connection to the ancient hellenic culture of excellence. No other olive growing region has this rich olive oil history and culture. 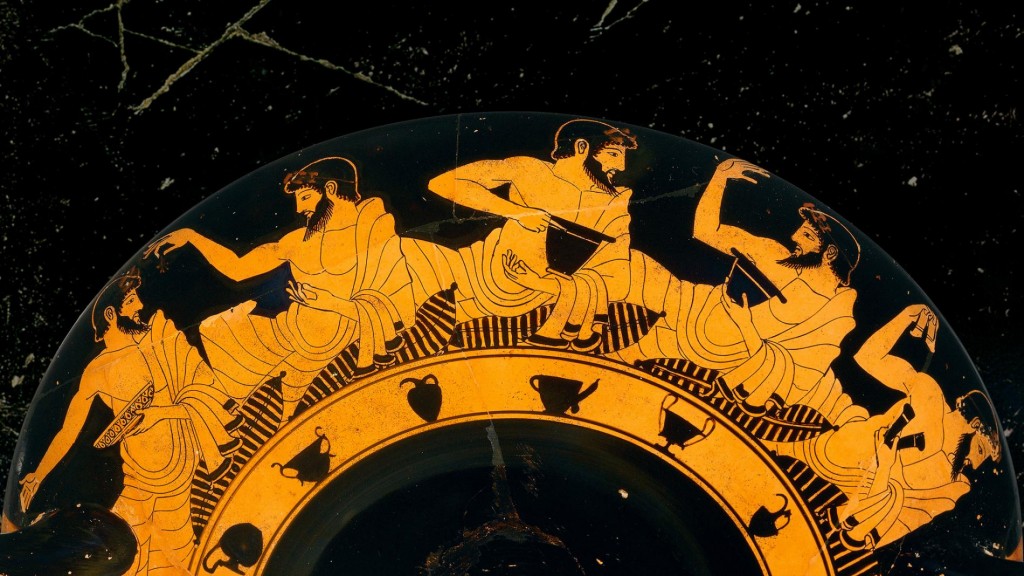 This is the inheritance from ancient times of the varieties chosen for their phenolic content. Health benefits is the only reason people choose to pay more for olive oil and not the taste. This is how it was back then and this is how it is once again today. What is the taste of the highest phenolic EVOOs?

Peppery and Bitter. Oleocanthal gives the peppery taste in the throat and oleacein gives the bitter taste to the tongue. In ancient times Hellenes used wine to mix with the high phenolic EVOO to neutralize the strong taste. Today we use balsamic vinegar to add taste to tasteless rancid olive oils.

The Olympia Health & Nutrition awards were awarded at a special event held in the Old Parliament on 12 May 2019 organized by the National and Kapodistrian University of Athens and the World Olive Center for Health (WOCH), a nonprofit organization, having as mission to raise financially the whole olive sector internationally.

This year the competition involved 1569 samples of olive oil from 8 countries. This is almost double the number of entries than the second biggest olive oil competition. 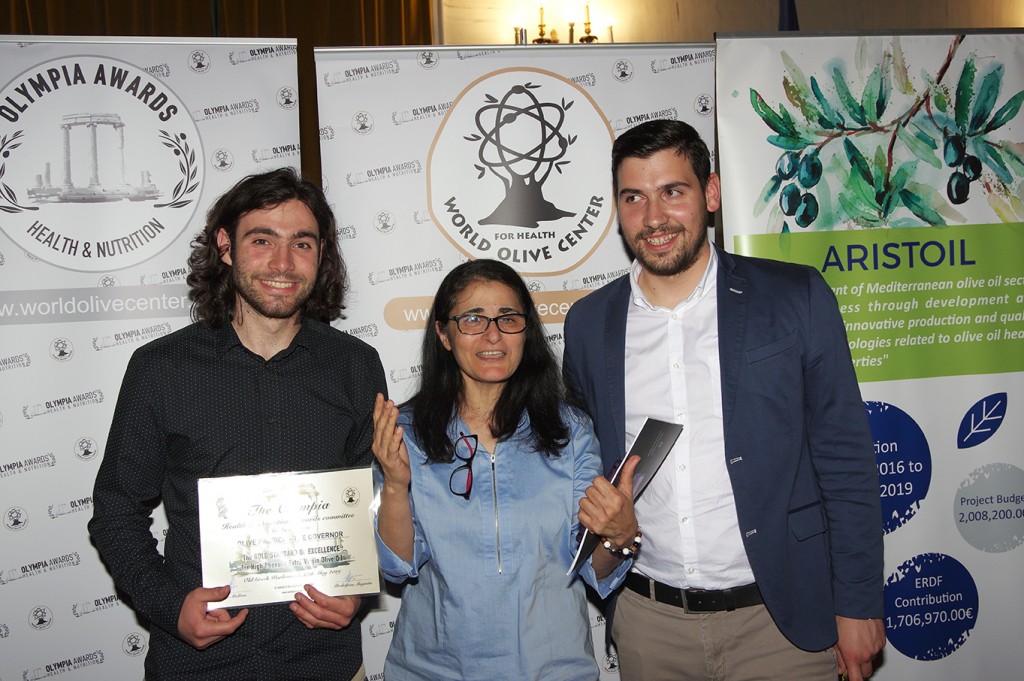 The award ceremony took place in the framework of the events of the European program INTERREG MED “ARISTOIL”, in which Greece, Cyprus, Spain, Italy and Croatia participate under the scientific supervision of Professor Prokopios Magiatis and which is coordinated by EGTC “Efxini Poli” with the cooperation of the Region of Peloponnese.

It should be noted that the awards are given solely on the basis of the concentration of the health protective substances of the European Health Claim Regulation and are awarded to producers for their care for the production and promotion of olive oil as a product for the protection of human health. 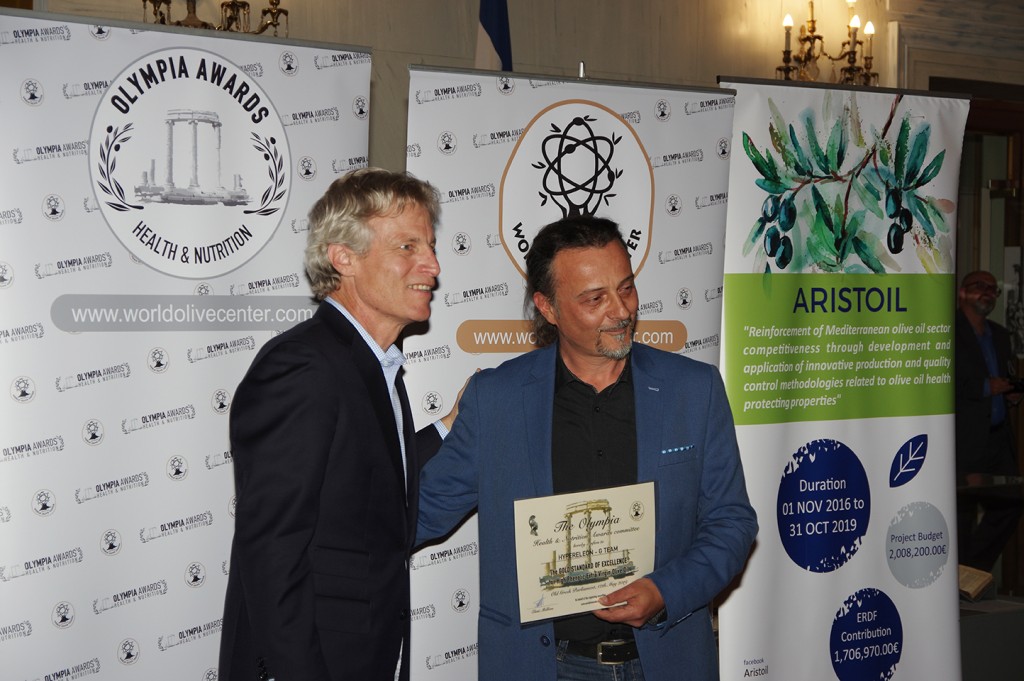 In parallel, more than 300 producers and scientists attended very important scientific announcements on the results of experimental and clinical trials with high phenolic olive oil, while the coordinator of the ARISTOIL project Dr. Krimnianiotis announced the creation of the Cluster of MED Health olive oil. 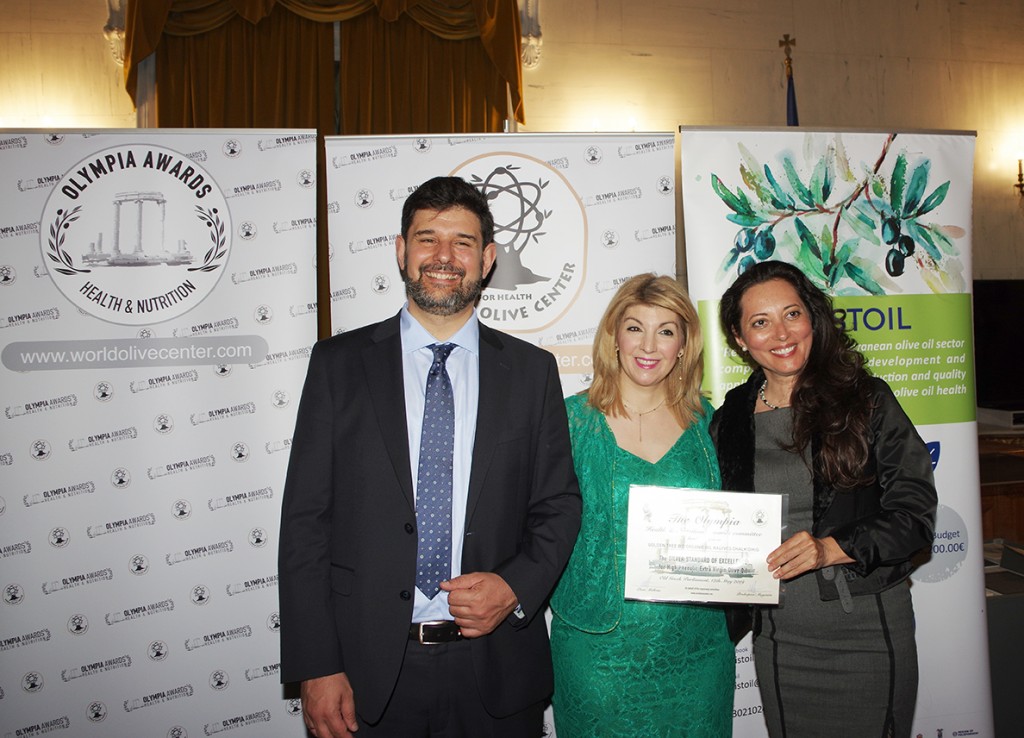 For the first time, very important results from two American universities were announced regarding the action of high phenolic olive oil and its active ingredients, in particular oleocanthal, which showed that they can inhibit the progression of Alzheimer’s disease and breast cancer in experimental animals while it has been shown that they can be used in synergy with classical drugs with even more positive results. 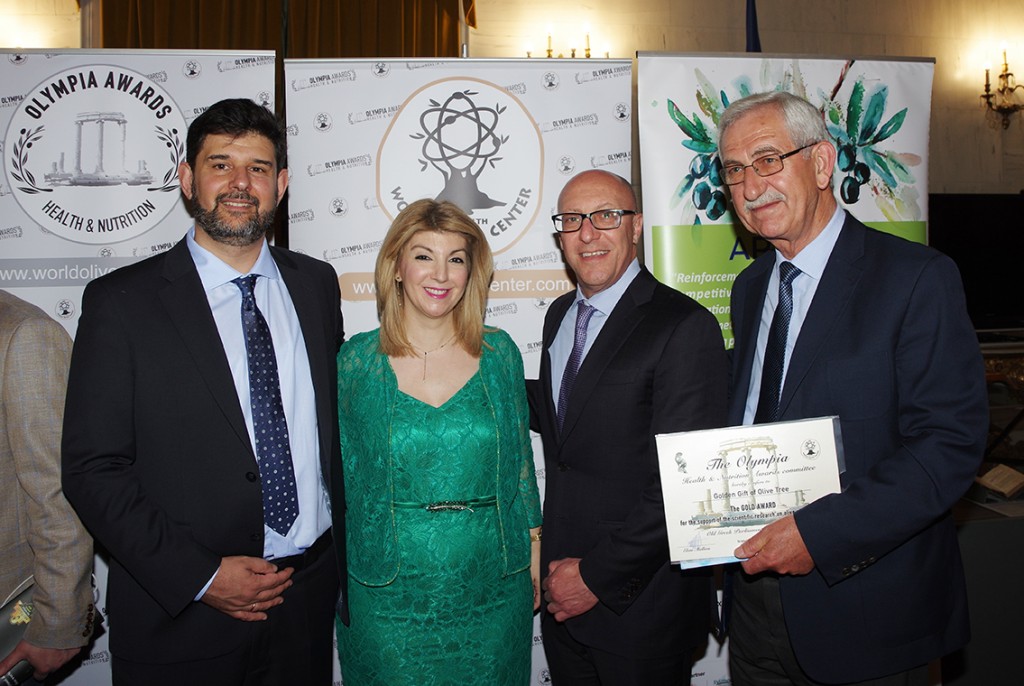 The high phenolic olive oils that were used in the clinical studies in the US and Greece were selected among thousands of samples by the University of Athens and the team of Professor Prokopios Magiatis. All studies were funded by donors through the World Olive Center for Health.

In the first study, performed under the supervision of Professor Magda Tsolaki in Univ. of Thessaloniki, Chalkidiki early harvest oil with a high phenolic content (donation from Ioannis and Evi Prodromou, YIANNIS) showed that it can reduce certain categories of symptoms in patients with mild cognitive impairment (precursor stage of Alzheimer’s disease) after daily consumption of 40 gr for almost two whole years, compared with the control group that did not receive any specially selected olive oil. Already from the first year of the study, the results of which were announced last year, it has been shown that high phenolic olive oil provides protection to the central nervous system confirming the studies conducted in experimental animals at various universities around the world.

In the second study, performed under the supervision of Professor Rojas (University of Peloponnese), olive oil rich in oleocanthal from the Lianolia Corfu variety (donated by the Dafnis family, The Governor) was given for a period of three months up to 1.5 years in a total of 30 patients with chronic lymphocytic leukemia or monoclonal gammopathy of unspecified significance at such a stage of the disease that chemotherapy was not yet necessary. The striking results showed a decrease or stabilization of white blood cells, a specific death of cancer cells and a fall in cancer markers in a significant number of patients. At the same time, olive oil improved a series of biochemical indices without any negative effect on patients. This year’s results confirmed the initials announced last year in a smaller number of patients and give great optimism for the future. This is the first time that there are so strong indications about the healing properties of high oleocanthal olive oil in oncology patients and not only in experimental animals. 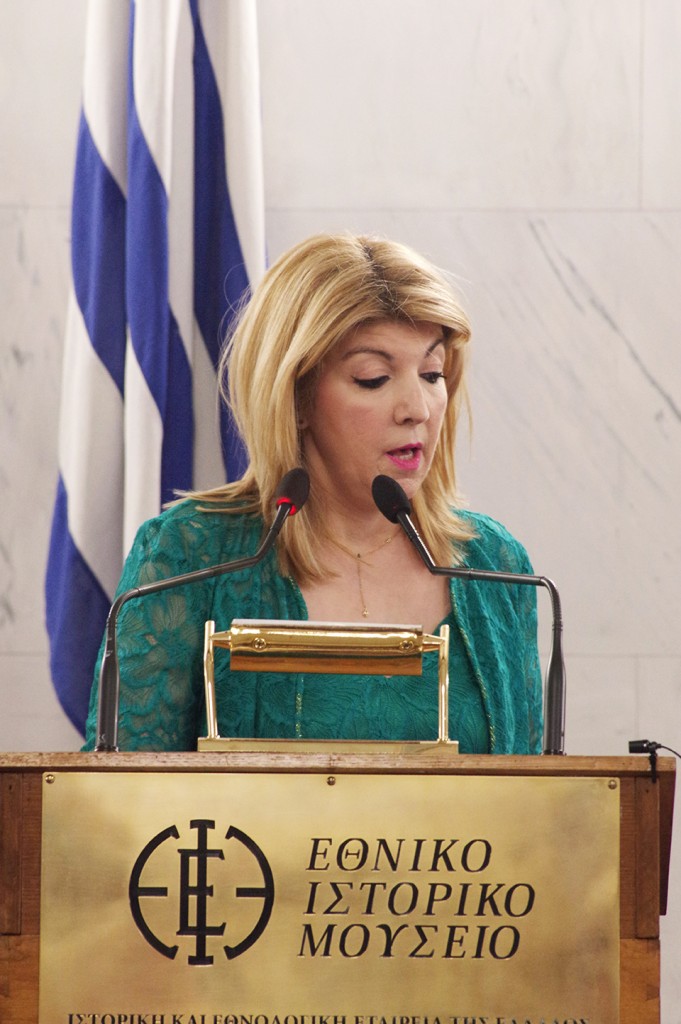 In her closing speech, the president of the World Olive Center for Health Dr. Eleni Melliou, emphasized that there is now a major change in the way the international scientific community faces the beneficial properties of high phenolic olive oil for health. It is of course necessary to continue in Greece and the USA the studies that have begun and invited the hundreds of producers who attended the ceremony to support the financing of the clinical studies through the non-profit organization.