In this document Dr. Prokopios Magiatis explains the reasons HPLC-UV is wrong method for EU 432-2012 health claim regulation. HPLC-UV for measuring phenolic concentrations is not suitable for use in implementing the EU 432/2012 health claim regulation for polyphenols. High phenolic olive oil is now a household name and it requires greater attention on how these health promoting and some are even medicinal compounds in olive oil are measured.

Here is Dr. Prokopios Magiatis in his own words:

The NMR spectrum is recorded in a solution of an inert solvent like CDCl3 which cannot react with any of the measured phenols and in addition there is no static phase, no pumps, no UV lamps, no moving parts (e.g injectors) that could interfere with the analysis. The sample is inserted into the magnet and the measurement is completed in less than 60 sec. 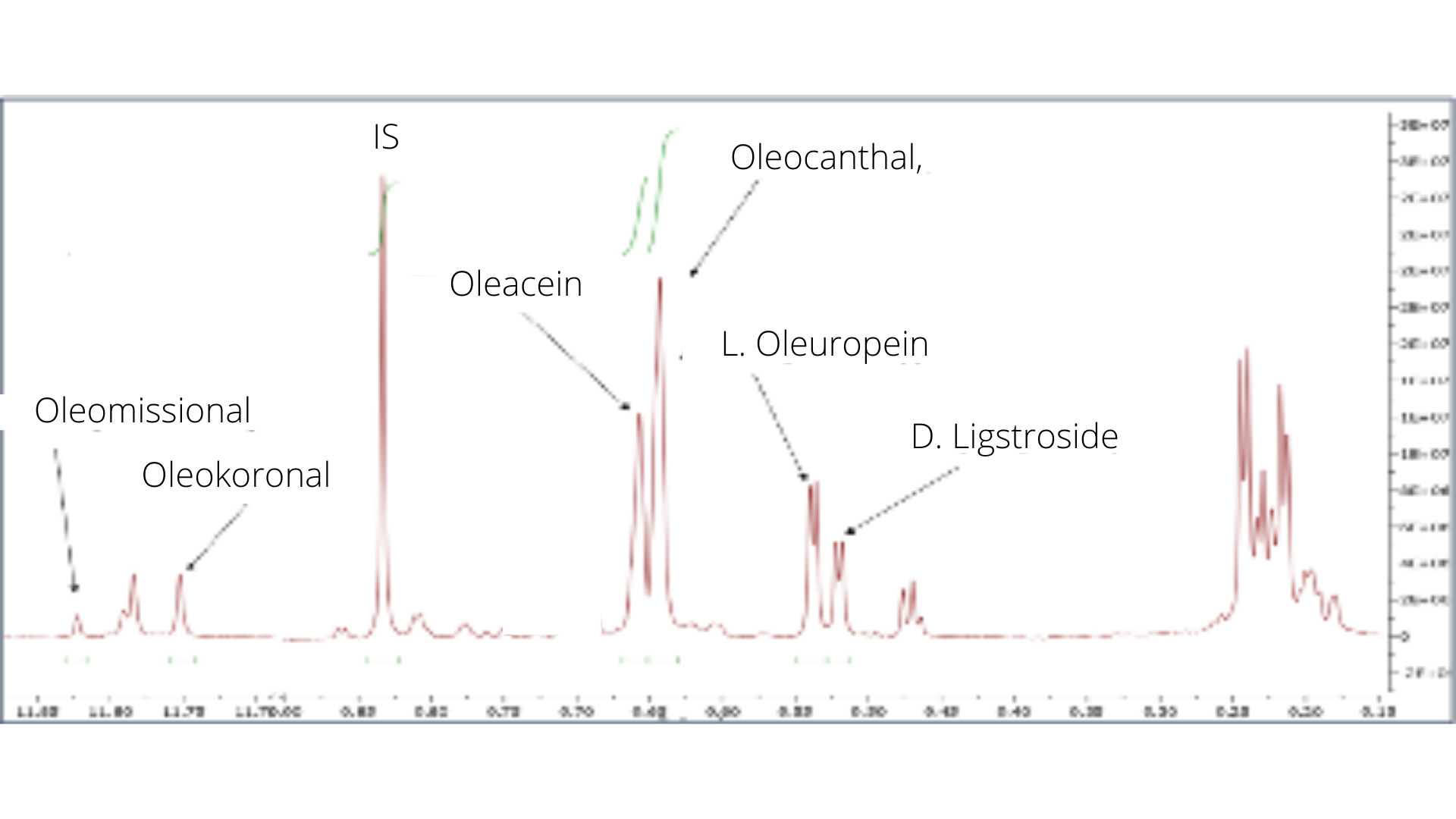 The measurement of the area of each peak (called integration) is a mathematic procedure performed automatically by the software of the NMR instrument and is not influenced by the user.

The errors that occur during this measurement are the following:

This is a very critical mistake because all the phenolic ingredients of olive oil that contain the moiety of hydroxytyrosol (like oleacein, oleuropein aglycon and oleomissional) have almost double capability to absorb UV light in comparison with the molecules that contain the tyrosol moiety (oleocanthal, ligstroside aglycon and oleokoronal). In this sense olive oils that contain more hydroxytyrosol derivatives than tyrosol derivatives appear artificially to be richer in total phenolics when the results are expressed as tyrosol equivalents.

The above problems can be partially overcome using calibration curves constructed with pure oleocanthal or oleacein but until now this is not included in the official method.

For the above reasons the HPLC method underestimates dramatically the real oleocanthal and oleacein content.

Concerning compounds like oleuropein aglycon and ligstroside aglycon it should be noted that during chromatography they are getting partially isomerized (from open to closed ring forms) and again the real content of the olive oil for each compound cannot be measured. The closed ring forms are overestimated in comparison to open forms (oleokoronal and oleomissional)

Due to all the above reasons the HPLC chromatograms become very complicated because each compound is transformed to several artificial derivatives or isomers and consequently the peaks are heavily overlapped and the exact area of each peak is difficult to be measured. For this reason, the official method should not be used for the measurement of each independent compound. Although this is mentioned in the protocol of the official method several laboratories use erroneously the HPLC-UV method to measure independent phenolic compounds and express their results as tyrosol equivalents.

Again, the relative comparison among different olive oils of the same variety with the HPLC method is generally correct since the same mistakes happen for all compounds.

The big problem arises when the absolute measurement from the NMR method is compared with the relative results of the HPLC method.

In that case, on top of all the above problems there is a very simplistic but widespread confusion: Tyrosol has a molecular weight of 138 mg/mmol, while oleocanthal has a molecular weight of 304 mg/mmol, oleacein 320 mg/mmol etc. So when we measure an olive oil by NMR containing 304 mg/Kg of oleocanthal, it means that it contains 1 mmol/Kg of oleocanthal. If we assume that one molecule of oleocanthal absorbs the same amount of light as one molecule of tyrosol (which is not exactly true) then if we express the results as tyrosol equivalents, then this amount of 1 mmol corresponds to 138 mg/Kg of tyrosol. It is astonishing when chemists are trying to compare absolute measurements (like NMR) with relative measurements expressed in equivalents (like HPLC), without explaining this basic difference. Simply the difference of the molecular weight by itself can explain why the HPLC values are generally much lower than the NMR. If besides this problem we add the underestimation of oleocanthal and oleacein by HPLC due to interaction with mobile and stationary phases and the formation of numerous artifacts then it is obvious that HPLC measurement is completely inappropriate and misleading for the measurement of independent phenolics and in addition it is obvious why it gives lower arithmetic values in comparison with NMR.

For all the above reasons the comparison among different olive oil concerning their total phenolic content should be performed only by the same method. Especially the measurement of independent phenolic compounds can be reliably measured only by NMR (or appropriately calibrated LCMS) but not by HPLC-UV with tyrosol equivalents.