Work with Nature and Nature will surprise and delight you. 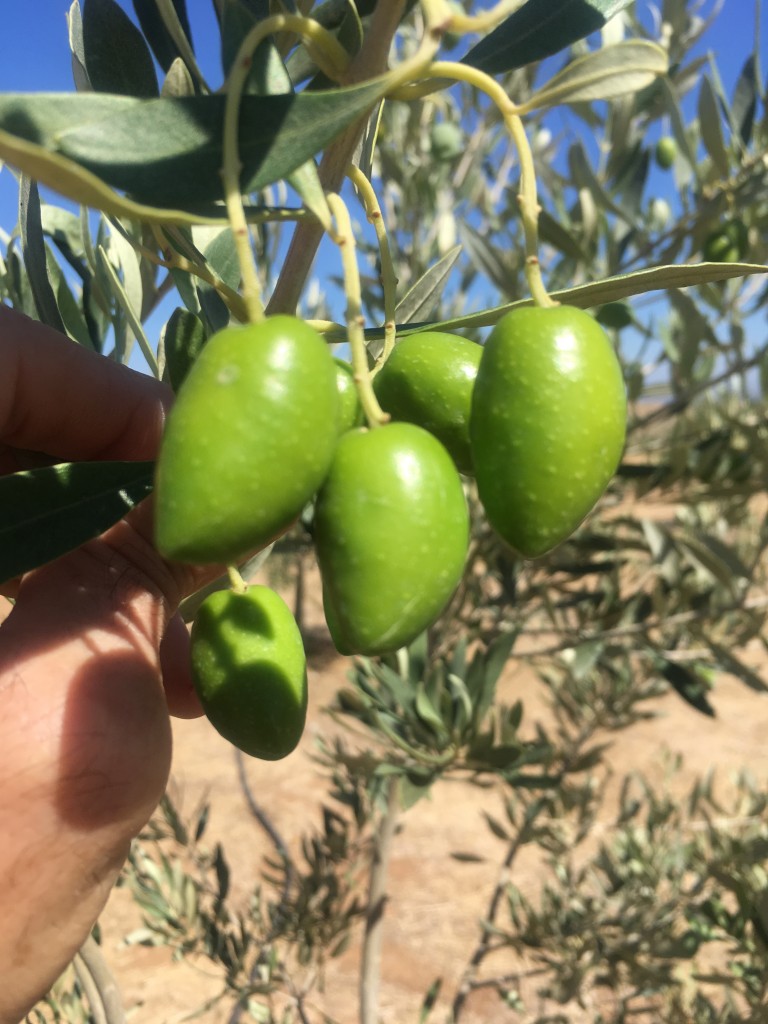 Announcing the olive oil with the highest-ever content of health protective oleocanthal.

Last year Atsas Organic Farm astounded both the olive oil industry and research scientists by producing an olive oil from Kalamon variety olives (known for table olives) with a total phenolic content of 3660 mg/kg. The oleocanthal content (the phenol most researched for health benefits) was 2776 mg/kg and setting a new world record. What makes this even more extraordinary is that the farm is in what is called a rain shadow and there had been no rain for 13 months. Was this a fluke?

Apparently not. Regenerative agriculture not only promises but delivers; the olive oil miracle is Nature at her best. This season, harvesting in September, early by traditional standards, Nicolas Nétien waited apprehensively while his first cold pressing was given its preliminary test using the Aristoleo® Test Kit and the new portable Aristometro™ spectrometer. The test later corroborated by NMR (Nuclear Magnetic Resonance) at the University of Athens by Drs. Prokopios Magiatis and Eleni Melliou was a record breaking 4947 mg/kg total polyphenols “Fifty-three milligrams short of my 2017 objective”, shares Nicolas. Oleocanthal was off the charts at 3762 mg/kg. Atsas has set a new world record for the second year in a row. 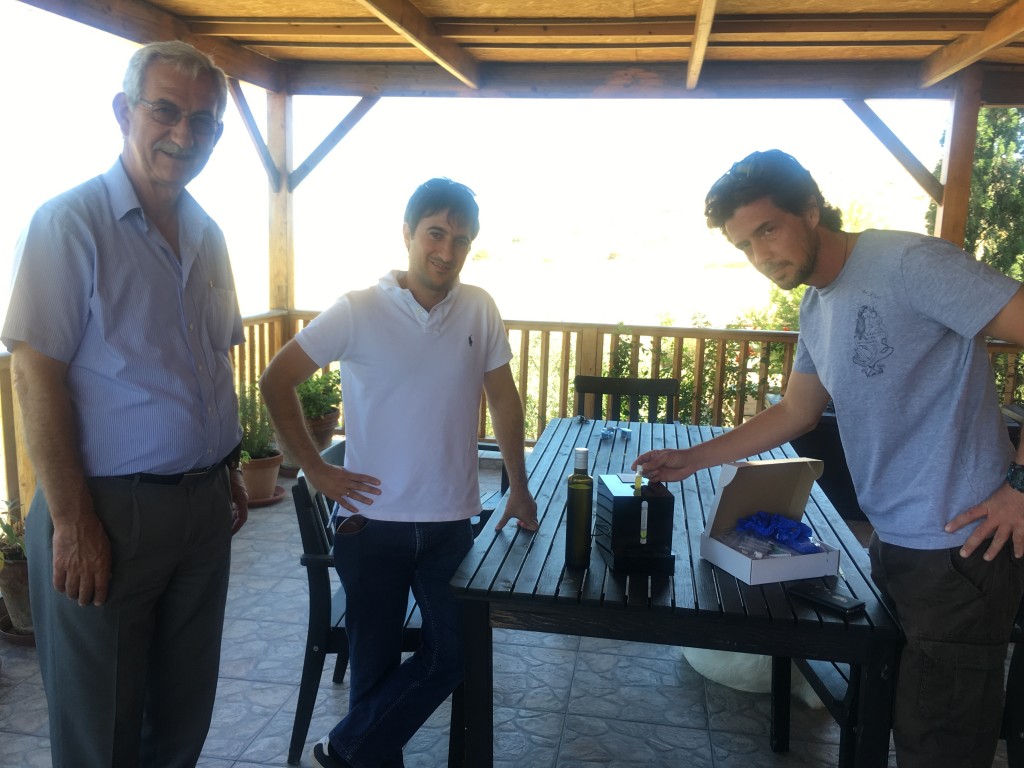 Nicolas and his wife Maria manage Atsas Organic Farm on behalf of Maria’s uncle, George David. It is in a gently sloping valley within the UN buffer zone between Cyprus and the Turkish occupied north. Over the barbed wire and past the watchtowers in the Turkish territory is the village of Petra where David’s family has its roots. In 2013 when Nicolas and Maria, eight months pregnant, came to oversee the 38-hectare farm, it was George David’s vision to restore the environment and produce the best olive oil in the world within five years. Agro-ecology – working with nature – gave him his dream in the third year of making olive oil. And this year the farm has broken its own record.

Nicolas and Maria met in Jordan on the Greening the Desert project and continued on to Australia to complete their studies in Permaculture methods with Geoff Lawton.

Nicolas and Maria’s training and experience in regenerative dry-farming in Jordan was the perfect solution to the situation they took on when they were hired to manage the farm. In his talk at Beyond Organic, Beyond Extra Virgin Conference in May of this year, Nicolas describes the process that regenerated this patch of land in the driest part of Cyprus to produce its precious oil. Atsas Farm is a model for the world seeking sustainable methods to restore Nature to her bountiful best. 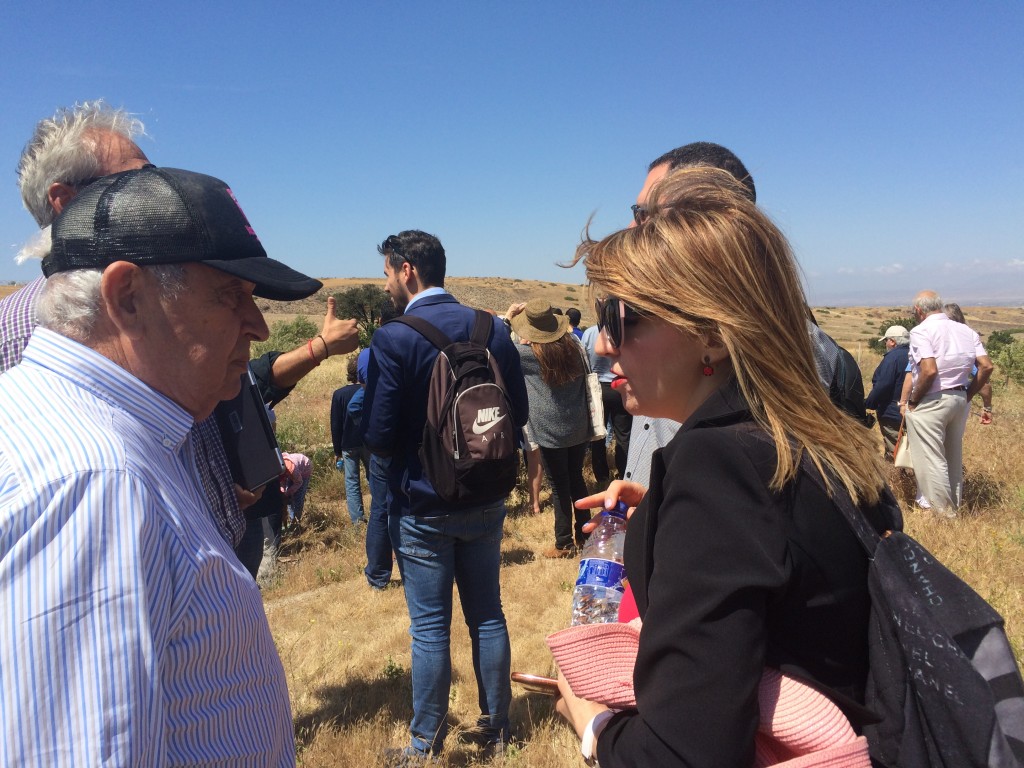 “If you are going to dream, dream big!” George David

This rocky ground with barely 1 cm of topsoil (most crops grow in 15 cm) had little vegetation and was ridged by erosion gullies. What little rain that fell would follow runoff paths taking topsoil with it before moisture could penetrate. The first order of permaculture business is to observe Nature’s patterns and design a plan to maximise what will support Nature in doing what she does best. 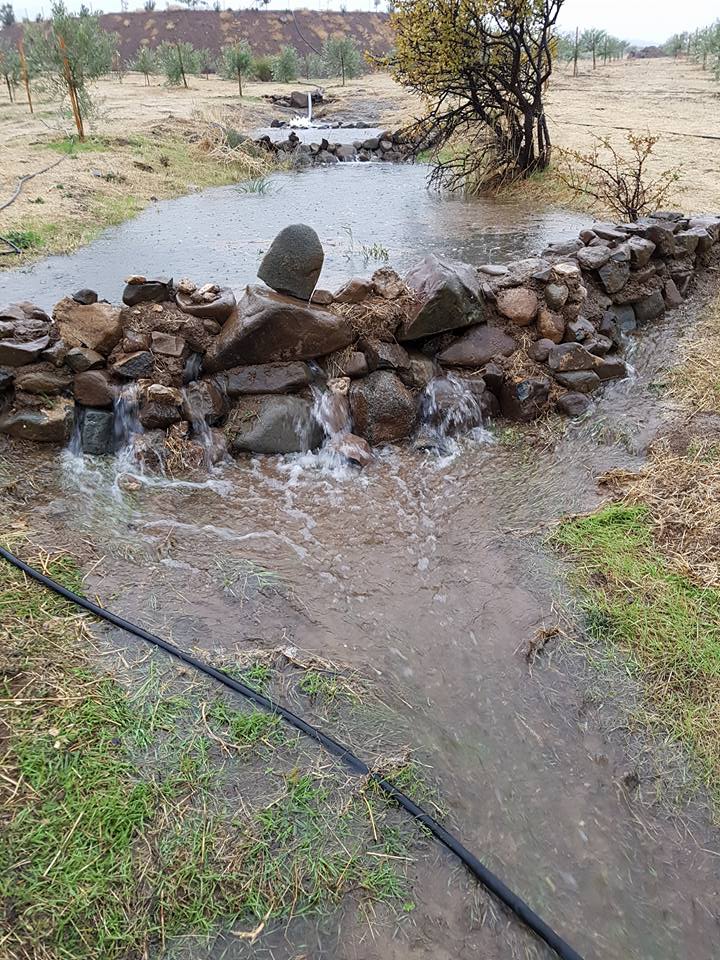 A damn was built to harvest rainfall and the runoff gullies were terraced to create catch basins where water would collect along with the topsoil washed from neighbouring fields. In time, these terraces provide rich deposits of topsoil. 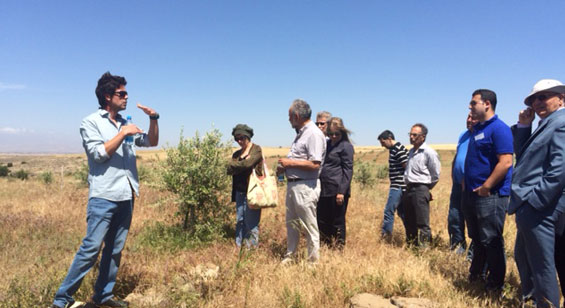 Over four thousand olive trees were planted by painstakingly drilling into the rock. You might ask here how two- and three-year-old trees in an arid climate could yield such high levels of oleocanthal and oleacein, often attributed to older trees. This is where the play of Nature really gets interesting. Indigenous plants were allowed to grow between the trees. On one visit to the farm Nicolas took us to a test area – a patch of ground marked by boards where he had tossed various seeds to see what grew without any assistance. Plants that grow together, thrive together. 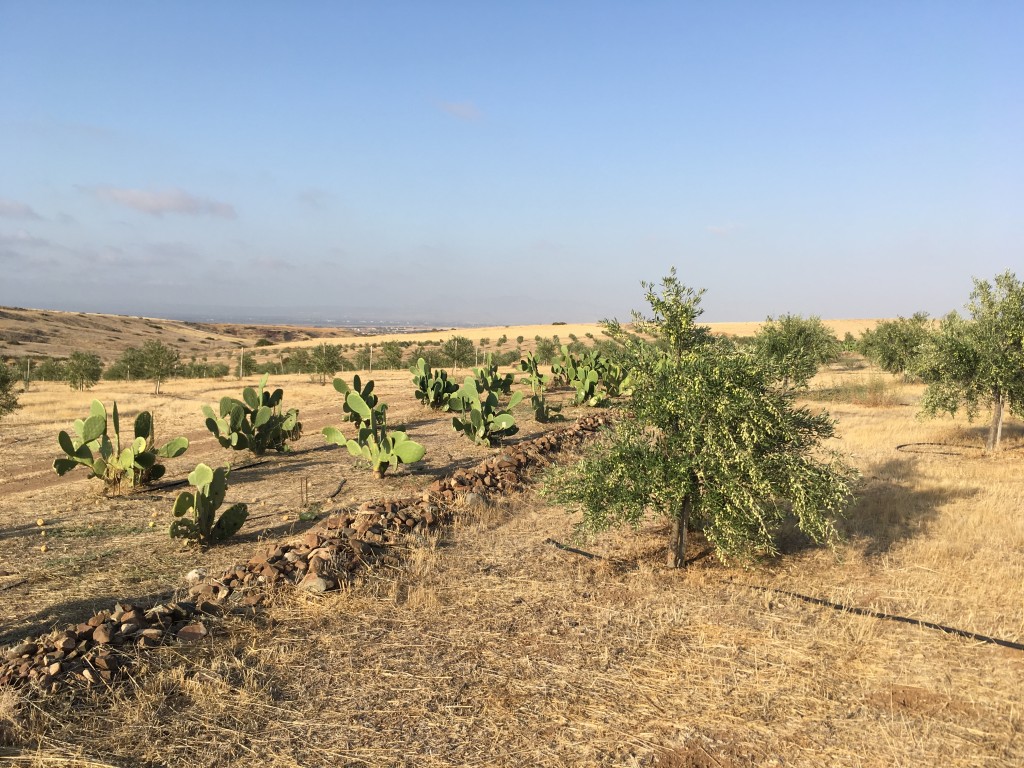 Prickly pear grows alongside olive trees while indigenous plants grow amongst the crops.

It’s beneath the soil where the real magic happens. With this natural biodiversity of plants, an inter-relating system develops supported by micro-organisms supporting an intricate cross-nourishing function. If a plant requires a certain mineral, it will emit a sugar that attracts the organism with the specific element it needs. As the roots systems are strengthened, the plant above ground flourishes, enriched in nutrients.

In conventional agriculture, which relies on chemical intervention of fertilisers, a plant is force fed minerals like nitrogen, potassium and phosphorus. Nicolas likens this to bulking up on a fast food diet of fats and sugars. The plant may grow big, but its vitality isn’t what it might be as the root system is underdeveloped. This means that the fruits and vegetables we eat lack the complexity of nutrients that support our optimum health. Eventually these salts accumulate in the soil killing bacteria and organisms, the crux of a healthy ecosystem, leaving the soil depleted. This continues the downward spiral that has resulted in the most fertile lands on the earth to become desert wastelands.

Permaculture or agro-ecology regenerates the soil by creating a diverse plant environment that in turn attracts the animals and insects that naturally fertilise and pollinate. As this environment matures and gets established it can affect the local weather patterns. 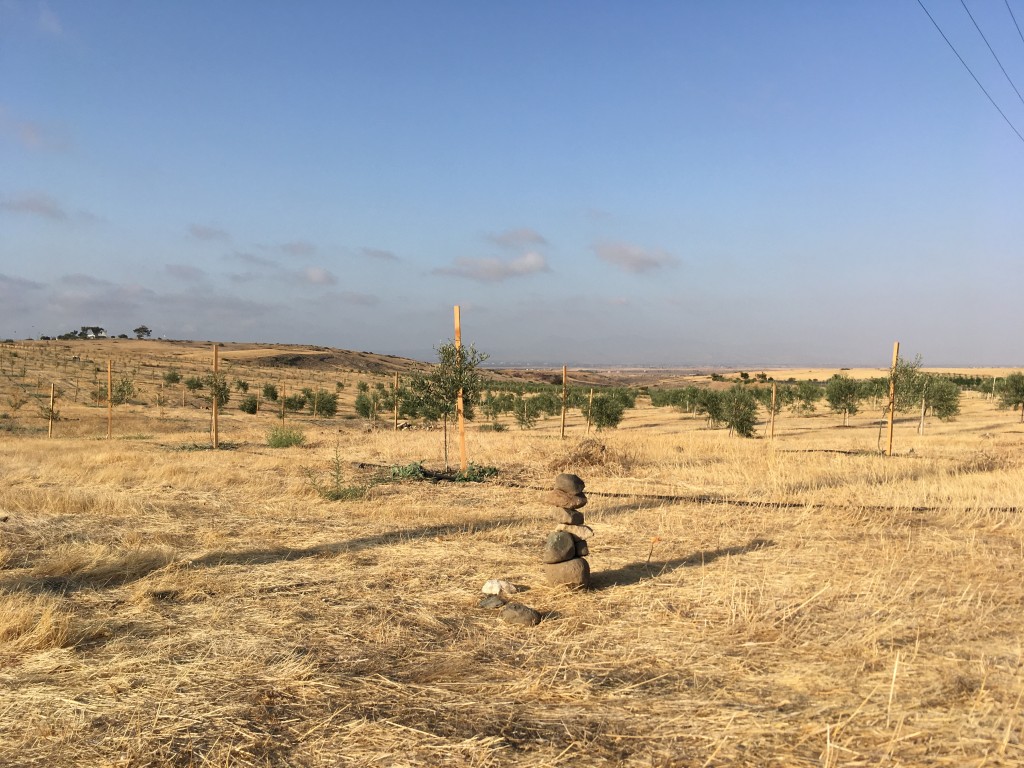 What we are witnessing here at Atsas Farm is the wisdom of Nature. Year two of extraordinary levels of health-promoting phenolic compounds in the olive oil proves that agro-ecology works. Respect for Nature in observation and subtleties of plant management can result in foods enriched in nutrients. The concentration of phenols in this olive oil, particularly oleocanthal and oleacein, means that it is closer to a nutraceutical that can also be used as a health-protective supplement.

At Atsas Farm agro-ecology methods were necessary in dire growing conditions. The efficacy of soil regenerative methods is proved in a short period of three years to produce exemplary olive oil. This year’s extraordinary improvement on that success can be an inspiration to other growers to embrace some or all of the principles to maximise phenolic content increasing the value of their yield. Indeed, Nicolas provides  certification courses in permaculture on the farm and at the nearby Atsas Training Centre. 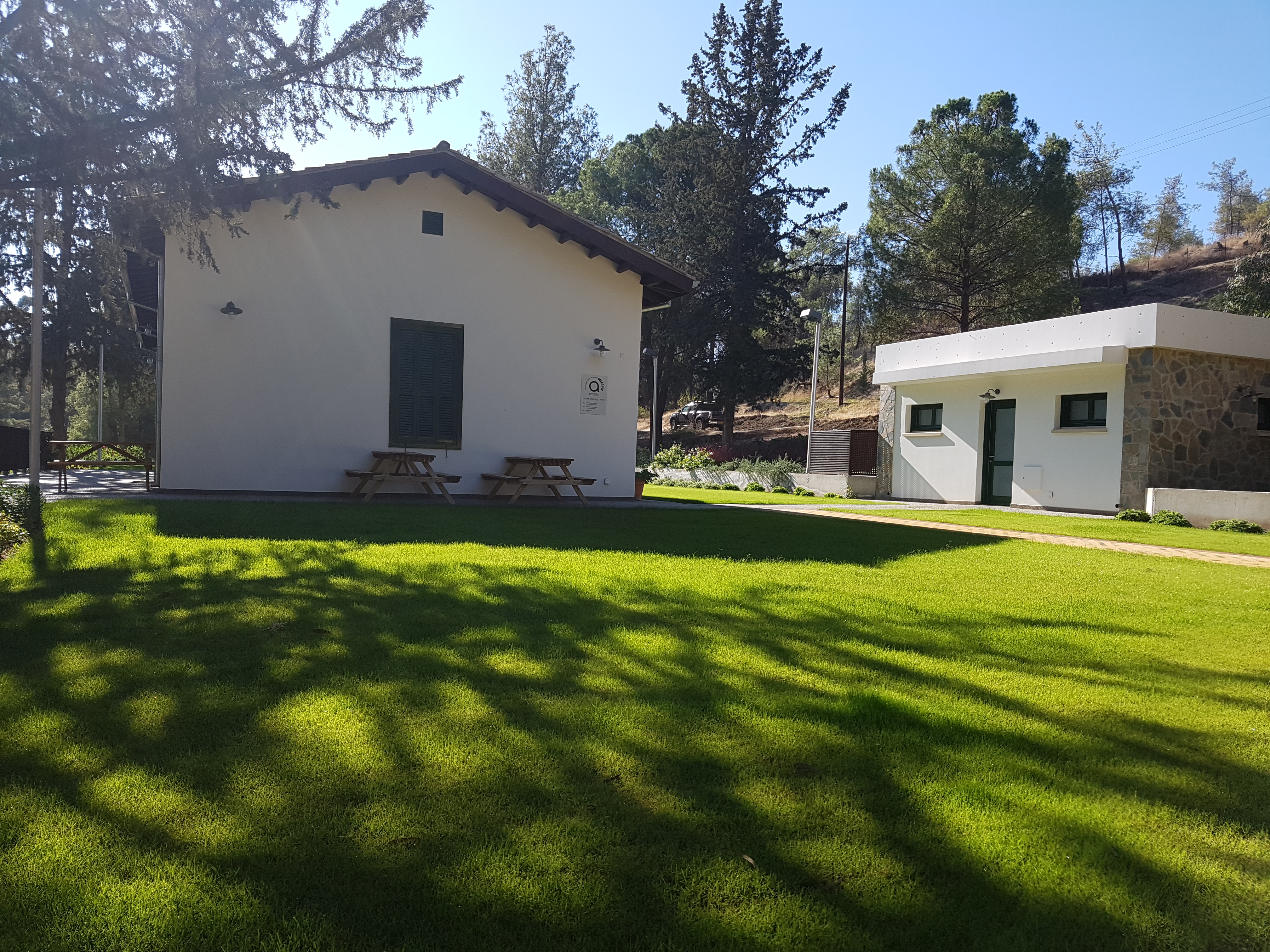 Atsas farm is one of more than 100 olive groves in Cyprus that are part of the ARISTOIL Interreg MED Programme; a 3-year, 5-country study to improve competitiveness of the olive oil sector by producing olive oils with proven health benefits based on their polyphenol content and conforming with the EU health claim labeling regulation 432-2012. Aristoleo Ltd is a key partner representing Cyprus with the task of developing portable analytical devices for olive oil phenolic compounds such as oleocanthal and oleacein.

Over 3000 olive growers in Cyprus, Greece, Italy, Spain and Croatia will be trained and their groves monitored to research the agronomic factors affecting olive oil phenolic content as well as developing and verifying new analytical methods. The end goal, of course is to get these many superior health promoting olive oils to international consumers.

This is good news for struggling olive growers in the Mediterranean area and around the globe – achieving more with less – because after all, Nature knows best.

P.S. This past May at our Beyond Organic, Beyond Extra Virgin Conference, we were privileged to have Her Royal Highness, Princess Basma of Jordan present the Aristoleo Double Gold Award to Atsas Organic Farm for their outstanding achievement.

About the Author: Marilyn Harding